The Primus Lite Plus is a the perfect choice for solo trips whether you're climbing or backpacking in the hills and mountains. Light and compact with superb fuel efficiency. The Lite Plus will take up minimum space, deliver fast boiling and you'll have to carry less fuel.

The Primus Laminer Flow Burner is combined with ETA technology resulting in superb efficiency, 0.5L of water boils in 2min 45sec. The burner is attached using a Triangular Joint Connection providing a secure fit with an easy twist. The outside of the pot has a removable heat resistant felt topped cover ensuring that heat doesn't escape, contributing to boil times and keeping food and drinks warm. The lid not only helps with cooking times but also doubles up as a mug saving you even more weight and space. In awkward environments the Eta Lite comes with a foot support that clips to the base of a gas canister. The Lite Plus also has a hanging kit, though this is quite basic it's a cord with a hook, again keeping weight to a minimum.

Lite+ sets a new standard for compact all-in-one stoves. Perfect for the solo trip or a coffee break for two - with the optional coffee press it makes two cups of fresh coffee in a handful of minutes!

I can't imagine any mountain scenario (except extended base camps) where I would need anything other than a compact stove. There's such a choice of excellent, nutritious freeze dried food and I'm happy to live off that type of food for well over a week. So, what I need is a water boiler: a fast and efficient one.

The Primus Lite+ is certainly that, with its 600ml capacity and a 500ml boil time of 2m:42s (sunny with no breeze) and a weight of 400g (without fuel, stand and stand rods) I felt the stove was a great addition to my camping/backpacking/bivvy kit. It was interesting to note that for all the Mountain Leader training expeditions I have led this season, only one person didn't have this type of stove. 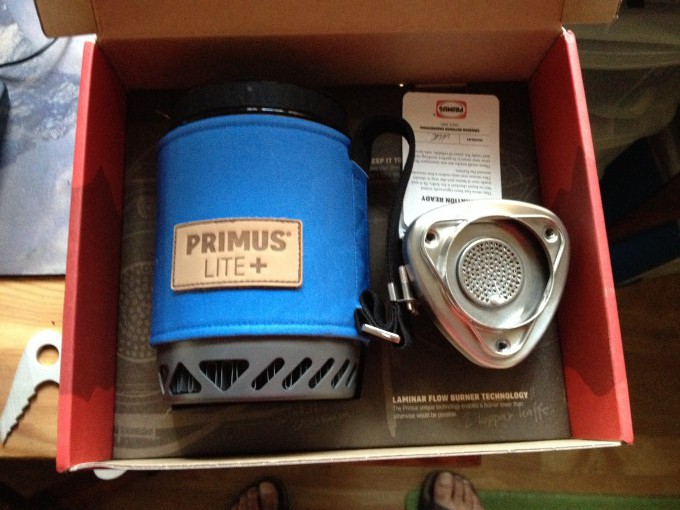 The Primus Lite+ is a great compact stove and engineered well


The burner unit was made from steel, plastic and brass with a piezo igniter and a ridged flame control dial. This worked fine and the burner ignited every time, I felt that the control know could have been bigger to make it more glove friendly. The unit is designed to work with standard, threaded gas canisters and it screwed on nice and easy providing a tight, gas free seal. As far as the burner unit goes it was nice and simple with nothing much to go wrong and being low profile it felt very stable. The only improvement I feel could be made is to make one from titanium which would decrease the weight further.

The top of the burner has a triangular wire around the perimeter and three threaded holes (more about these later). The triangular wire meshed with a triangular hole in the pot. This was great to use as there was no faff whatsoever, you just slid it in from any direction and give it a short twist and that was it. No need to find any slots or try and match anything up. This was one of the best features and easily set it apart from an MSR or Jetboil.

The base of the pot had the usual array for thermal fins that are standard on these types of stoves . There was nothing different about the Primus Lite+ and it was very efficient as you would expect. So efficient that I had to be very careful when cooking anything but boiling water in it as food would burn to the bottom very easily, but I've had this with all these types of stoves that I've owned. As I said earlier I mostly boil water in it so it's not too much of an issue. 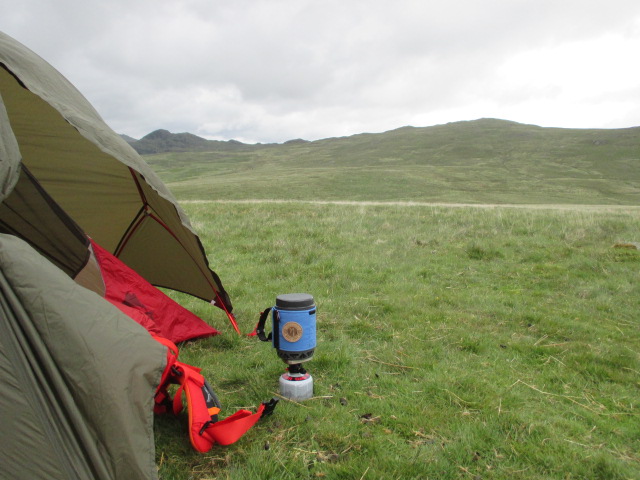 
The pot is encased with a great insulated cover. This felt very burly and was another feature that sets the stove apart from the competition. It is made from tight woven G-1000 material with a canvas feel to it (Fjällräven fans will know how excellent this material is). The insulation is provided by a brushed felt material and it was all held in place by a large Velcro pad so I could get a tight fit every time. On top of that there are also two leather labels that also provided extra insulation. There is also a wide tape handle which is double thickness and hooks onto the bottom of the cup to provide a handle (which felt a little flimsy but OK) and also hooked over the lid to keep everything secure whilst on the move.

Talking of on the move, the pot easily contained a 100g gas canister and the burner, but wouldn't fit the tripod support stand, which was annoying. The support stand folded out to offer extra support and clipped into 100g, 250g and 500g canisters. But in the end I didn't take it on most trips because it wouldn't fit into the pot and stability isn't really an issue unless it's windy. It was only really useful when using the extra pot stand and this is where those three threaded holes I spoke about earlier. I felt the stand needs a redesign so that it can stow in the pot with a 100g gas canister in too.

There are occasions where I might want to take an extra pot - a two night bivvy for instance with two of us so we can each eat out of a pot. Or I might want to cook for two in one pot so need a slightly larger one. This can be accommodated with the Primus Lite+ but is very fiddly. On the taped handle there is a steel clip in which there are three, very small, threaded and knurled bars. You have to unscrew these from the clip and screw them into the three holes on the burner. This all worked fine in calm, warm conditions but you can imagine how awkward it was in anything else. I couldn't help thinking that there must have been a more elegant way to solve this problem, we are talking Swedish designers after all. A simple folding stand that was pivoted onto the burner walls and just twisted through 90° would have been great.

The pot lid is made from polycarbonate and fitted nicely into the pot. It is slightly raised, with steam vents and a nice rubber grip to provide some insulation for your fingers when removing it. The Primus Lite+ also comes with a hanging suspension cord for big wall bivvies. This is easy to deploy by threading through the handle but is quite long. However, it is very easy to adjust the height by tying knots in it or doubling it up.

In conclusion, the Primus Lite+ is a supremely well engineered stove. The boiling time is great; it's efficient and has a great insulating cover. It has proved perfectly good for the plenty of expeditions I have used it for this season and it's been great to compare it to other stoves of its type where it compares well. There are a couple of design flaws, notably the extra pot stands and canister stand, which hopefully the designers will have another look at.

It's great for solo backpacking trips, bivvies and day trips to the crag for brewing coffee. Accessories include a coffee press and the range comes in the standard Lite and the bigger Lite XL which has a 1 litre cooking pot.

Customer Reviews of Primus Lite Plus